Widely regarded as the world’s most premium cigar brand, Montecristo cigars live up to their stellar reputation.

These smokes delight the senses with experiences that are always a thrilling adventure. This guide will introduce you to the cigar brand, covering its history, style, legend and smoking experience. All the key Montecristo cigars are reviewed and you will get a strong sense of the brand’s character, typical flavors, and long-standing reputation.

Montecristo cigars have endured for generations as connoisseur favorites, predominantly due to their luxurious qualities in both blending and construction. Only well-aged tobaccos are used to create Montecristo cigars, most of which are crafted by the most experienced cigar makers Cuba has to offer.

Montecristo cigars deliver a balanced smoke, neither too light nor too heavy in strength, with cigar body that is rich and refined. Montecristo cigars offer an experience that is smooth enough for new smokers yet firmly structured and complex enough for the most discerning of aficionados.

These characteristics combine with intensely pleasing cigar flavor profiles that have made Montecristo cigars a favored choice for cigar lovers everywhere.

The Montecristo range features various cigar sizes and shapes that each offer a unique take on Montecristo’s trademark character.

The Montecristo 520 Edicion Limitada 2012 cigar was unveiled in 2012 to celebrate the 520th Anniversary of Cuban tobacco, first making its way to Europe after Columbus’s first encounter with tobacco in 1492. The thick 6 1/8” x 55 cigar oozes with complexity throughout its medium-to-full bodied excursion. A rare treat.

The Anejados or “aged” Churchill-size cigar is aged for a minimum of five years for added depth and complexity. A bolder smoke than other cigars in the Montecristo range, this slightly box-pressed 7” x 47 cigar is a favorite of those with more demanding palates.

Named after the hero of The Count of Montecristo, the 5 3/8” x 52 Montecristo Edmundo cigar is an aficionado favorite. Balanced, rich in character and delicious, the Edmundo is a classic option for Robusto lovers searching for an authentic Cuban cigar experience.

This 6 1/8” x 50 cigar is a modern-day classic, which combines a popular Toro or Double Robusto shape with a richly textured smoke bursting with taste. The Double Edmundo is an after-dinner favorite and benefits from extended humidor aging.

Another member of the popular Edmundo marque, this 4 3/8” x 52 cigar delivers big-time body and taste from start to finish. An ideal option for those wanting a flavor-packed smoke of a classic Edmundo cigar in a slightly smaller format.

Yet another Montecristo classic, this 7 ½” x 38 cigar is a regular on Top Ten Lancero-size cigar lists. Its long, slender profile delivers a sophisticated and boldly complex smoke. The Lancero size is a favorite amongst many cigar makers, and this one will help you understand why.

A variation of the original Montecristo Especial, the No. 2 offers a slightly shorter smoke with its 6” x 38 size. It delivers the same body and taste level as the original, while freeing you from a longer commitment. Kickstart your morning with this delectable treat paired with Cuban coffee.

This 6 ½” x 42 Lonsdale has for decades been the go-to option for serious Montecristo fans. The cigar’s medium-to-full-bodied character delivers a smooth and satisfying journey.. It’s a classic representation of the Montecristo experience.

The Montecristo No. 2 is the granddaddy of all Montecristo cigars and one of the most famous cigars of all time. The unique 6 1/8” x 52 Pyramides shape delivers a rich and complex medium-to-full smoke. An enduring classic that is consistently ranked amongst the finest cigars in the world. Pay attention though, because it’s also the most counterfeited cigar in the world.

A modern take on the classic Montecristo No. 2, the 4 ¾” x 52 Petite No. 2 delivers the same legendary experience as the original, but just in a shorter format. Bold and complex, this medium-full smoke is a favorite no matter the time of day. Pair with rum or bourbon for a tantalizing sensory adventure.

The 5 5/8” x 42 Montecristo No. 3 is one of the original Montecristo sizes and a great entry into the world of Montecristo. Its combination of smooth medium-bodied character, compact Corona size, and endless supply of taste makes it one of the world’s most popular cigars.

Year after year, this classic Montecristo No. 4 ranks as one of the world’s best-selling Cuban cigars. Its versatile 5 1/8” x 42 size, balanced character and great value make it appeal to all levels of cigar enthusiasts. A winning choice, whether morning, afternoon, or evening.

The pint-size Montecristo No. 5 lets you enjoy the famous Montecristo body and taste in a petite format perfect for any time. What the 4” x 40 cigar lacks in size, it more than makes up for in body and taste. An all-time favorite companion to a cup of coffee.

This 5 7/8” x 54 cigar is part of Montecristo’s Open Series, which celebrates the active lifestyles of a whole new generation of Montecristo enthusiasts. The Open Eagle delivers a smooth, medium-bodied experience with a full spectrum of flavors freely flowing throughout the smoke.

Unveiled in 2009 as part of the Montecristo Open golf tournament launch, the Open Series celebrates cigar lovers who enjoy an active outdoor lifestyle. The Open Master is a popular 4 7/8” x 50 Robusto, which offers a smooth and tasty medium-bodied excursion ideal for all levels of taste.

Several of Cuba’s most storied brands have origins that date back as far as the 1840s, yet Montecristo cigars are relatively new on the Cuban cigar scene. Montecristo cigars did not make their entrance onto the world stage until the 1930s, but it proved a meteoric rise to the pinnacle of the cigar world.

The Montecristo legend began with Alonso Menendez, a Cuban entrepreneur, who gained control of Particulares cigars in 1935. Menendez set about reworking cigar operations to create an all-new Cuban cigar brand. Myths abound about how Menendez came up with the Montecristo name, yet the most common tale suggests the factory’s “lectores” or readers inspired it.

A lector reads books, poems, magazines, newspaper articles, and other writings to cigar rollers in the factory. As the story goes, the 1845 novel The Count of Monte Cristo by Alexandre Dumas was a factory favorite. Menendez liked the sound of it and chose it as the name for his new cigar brand.

Menendez later joined with his business partner to form Menendez, Garcia y Cia. In 1937, the partnership acquired Havana’s famous H. Upmann factory, which would serve as the new home for Montecristo cigars. From here, the Montecristo brand rose in prestige and, by the 1960s, was the unquestioned king of Cuban cigars.

Following the nationalization policies of Fidel Castro after the Cuban revolution, the Montecristo brand was taken from Menendez, Garcia y Cia and fell under the auspices of the Cuban government’s Cubatabaco. Throughout the 1960s and 1970s, other Cuban brands, such as Cohiba, would emerge to challenge Montecristo’s legendary status. Yet the brand has endured, and Montecristo cigars are now celebrated the world over like never before.

Montecristo cigars did not become legends thanks to flashy marketing. It’s all about quality. The tobacco, the cigar makers, the blends, techniques, and attention to detail that is so important.

At the heart of every Montecristo cigar is high-quality Cuban tobacco from the famed Vuelta Abajo region. Here the soil and climate are revered for cigars, delivering tobacco that is at once rich, balanced, and flavorful. Hand-selected wrappers are aged a full month in cedar rooms to help lock in the leaf’s savory aroma and taste.

The high-grade tobacco makes its way to Cuba’s cigar factories, where expert cigar makers assemble the tobacco leaves into world-class cigars. With enormous worldwide demand, Montecristo cigars are no longer made solely in the H. Upmann factory. Various other cigar factories are used to keep up with demand while maintaining quality. 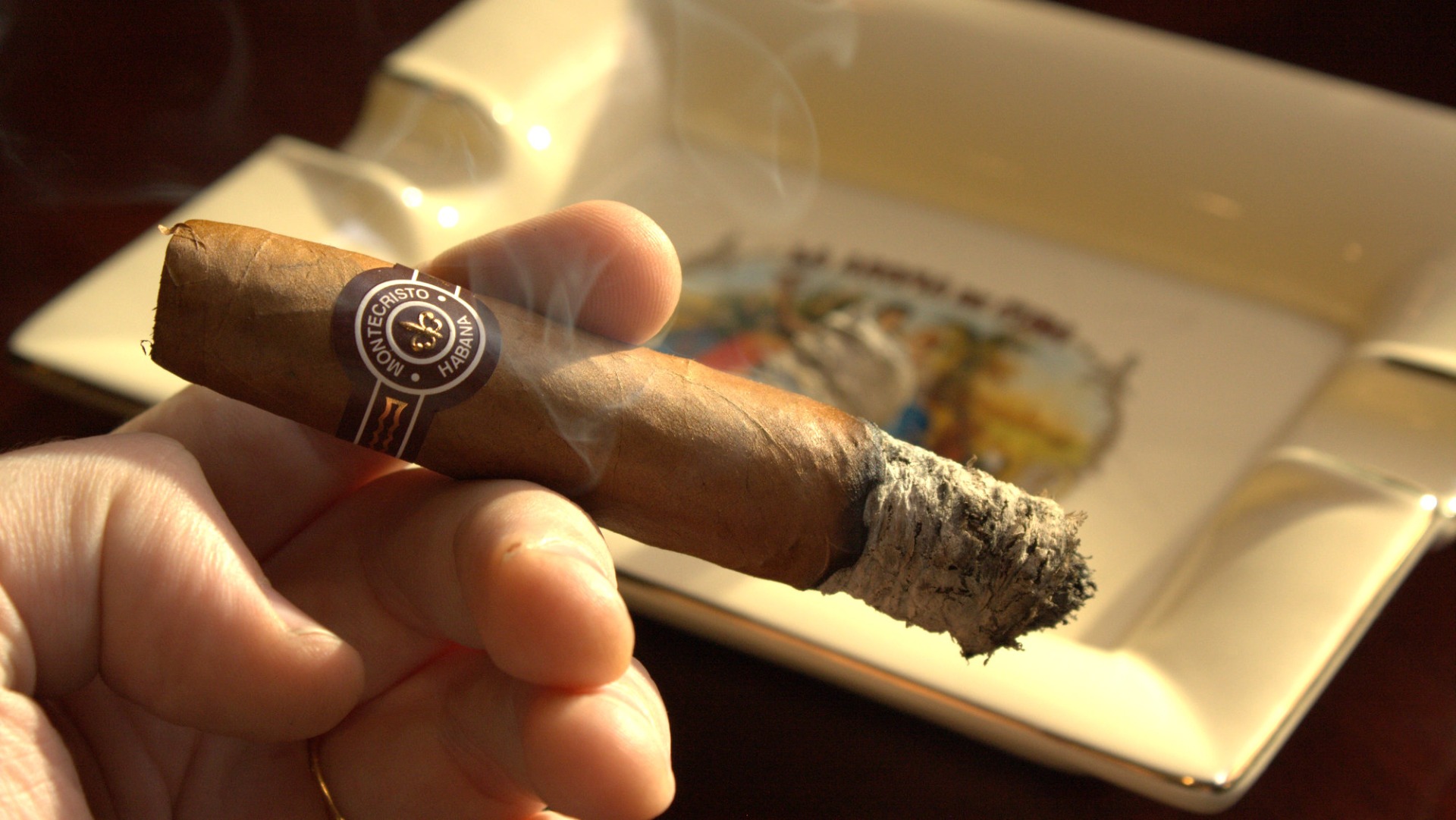 When to Smoke a Montecristo Cigar?

A Montecristo is not just a cigar but an experience to be cherished. While it might be true that there is no wrong time for a cigar, Montecristo cigars deserve to be an occasion all their own. You don’t have to be an experienced connoisseur to enjoy a Montecristo. You just need to set aside the time to savor and appreciate its qualities.

Montecristo cigars are renowned as great options for cigar pairing, with various spirits, including scotch whisky, rum, bourbon, cognac, and tequila. A “Monte” and a cup of coffee is another popular pairing. Cuban coffee especially offers a richly satisfying experience. Even if you are a purist who prefers nothing more than water as a palate cleanser, Montecristo cigars are still a treat. 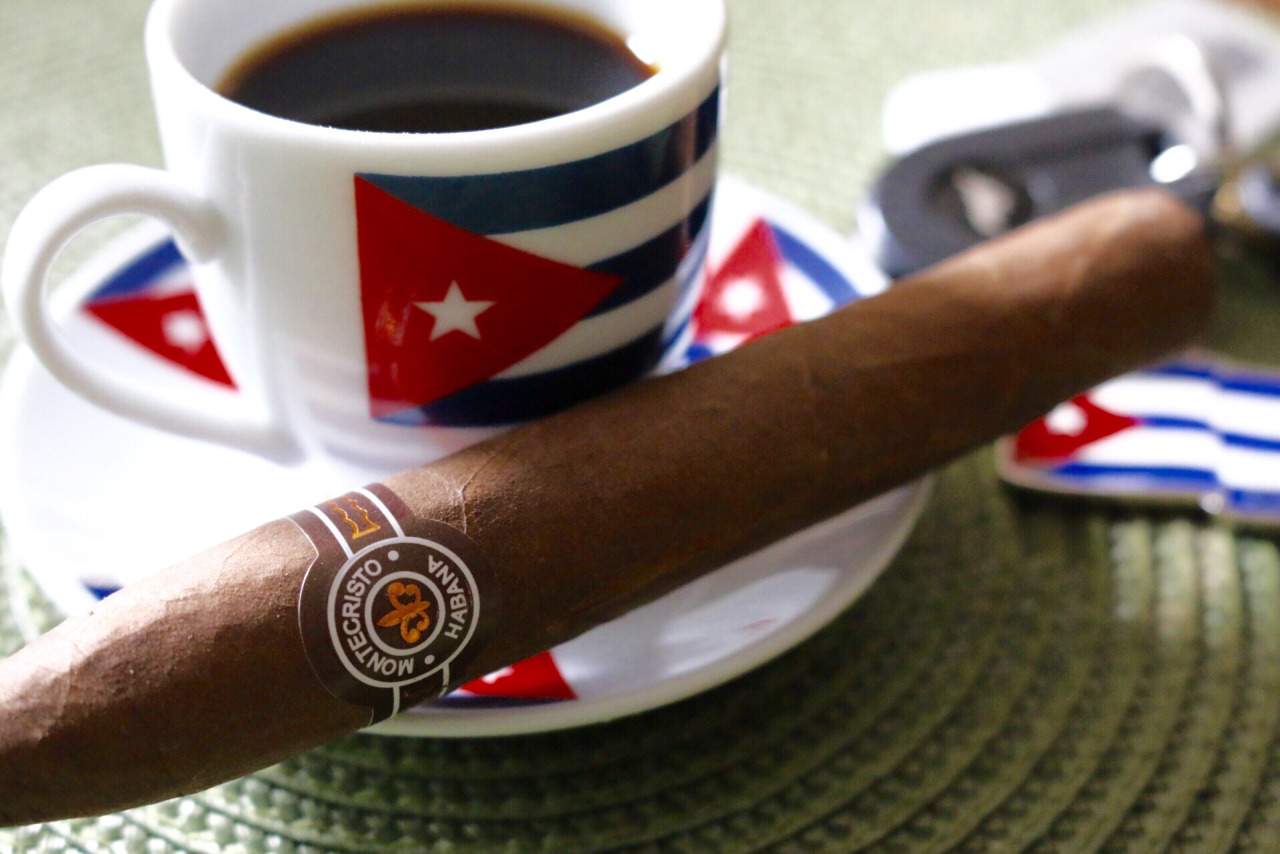 The legend about Montecristo is centered on an obsession with quality, so that every cigar smoker, new and old, traditional and experimental, appreciates a Montecristo cigar.   Shop for the authentic Cuban cigars online and find a Montecristo cigar that fits your perfect cigar moment today. 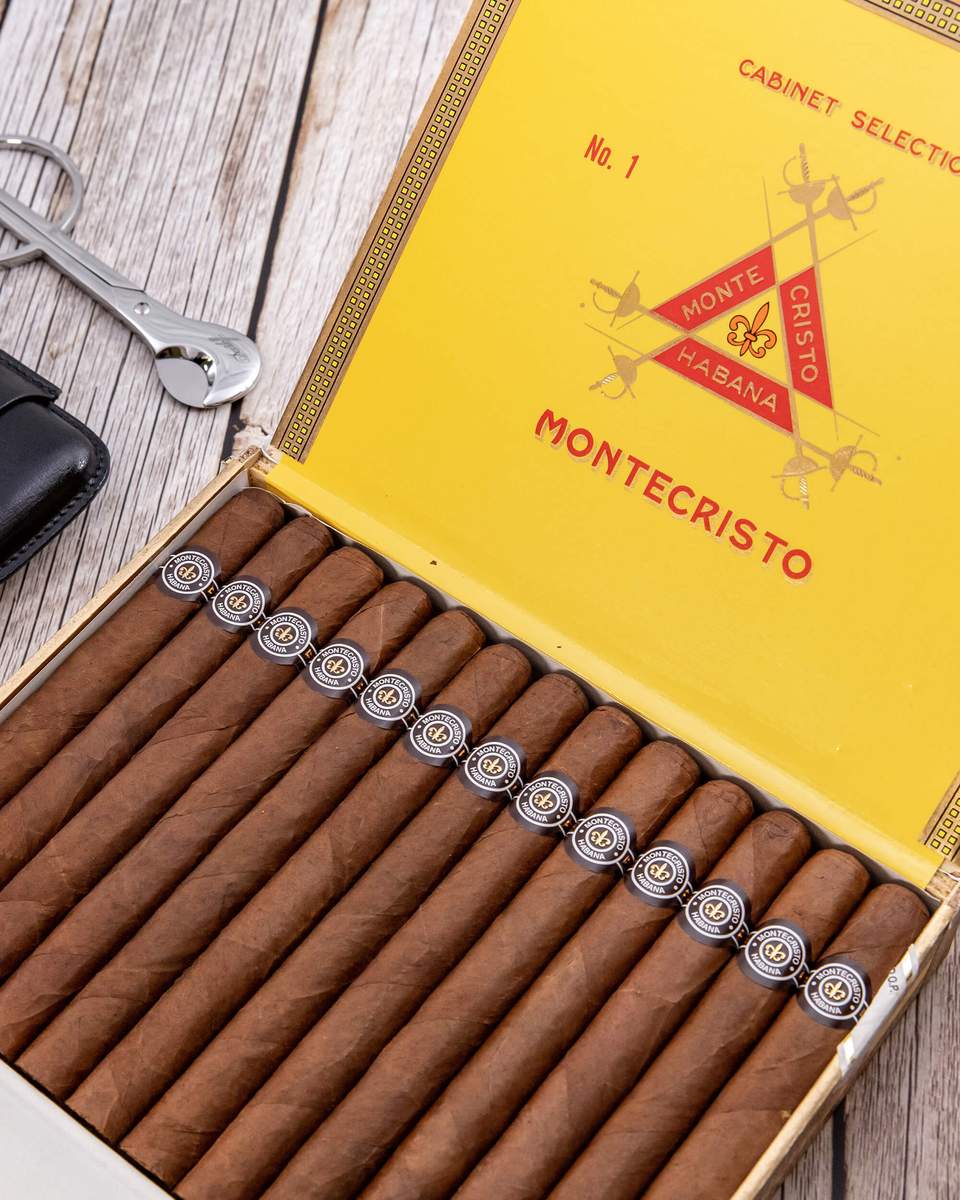 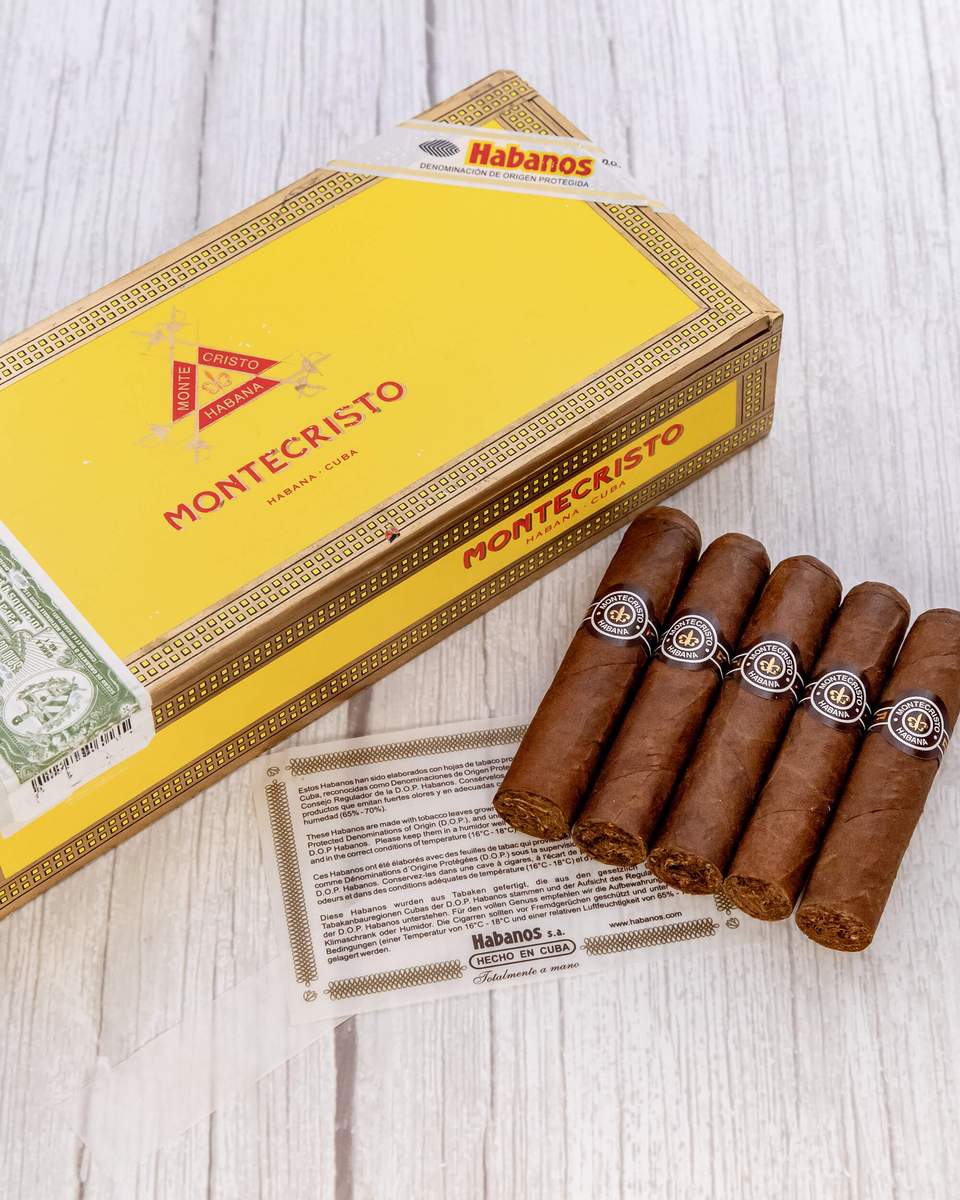