Partagas cigars deliver a deeply complex smoking experience, renowned for a famously unique "Partagas" character found nowhere else. Thanks to this trademark character, Partagas continuously ranks as one of the most reliable and distinctive brands for cigar lovers.

This definitive guide introduces you to the Partagas brand's style, storied past, and the current line-up of exciting smokes. You’ll also learn about the brand’s symbiotic relationship with Cuba's climate and soil, something that has made Partagas a cigar for the ages.

Behind the lasting popularity of Partagas cigars is an unmistakable quality that separates the famous smokes from other cigars, both Cuban and non-Cuban alike. It all starts with the fertile soil of the Vuelta Abajo region of Cuba's Pinar Del Rio province.

Tucked away in the heart of western Cuba, the region's soil is perfectly suited for cultivating tobacco that is at once tasty, rich, deeply textured, and aromatic. The region sits between the Caribbean Sea to the south and the Gulf of Mexico to the north, where a balanced tropical climate further aids exceptional tobacco growing.

In the hands of master cigar rollers, Vuelta Abajo's tobaccos deliver a full-flavored smoke with notes ranging from hazelnut and black cherry to white cedar, complex leather and a full range of spice. These flavors and more are wrapped up in a solid earthy core that has become a Partagas trademark. The boldly satisfying character makes the Partagas brand one of the most popular in the world.

Partagas cigars are available in a variety of popular shapes and sizes, each created to maximize the famous Partagas body and taste.

The Partagas 898 is an all-time favorite that delivers a rich and flavorful smoke and greatly represents the classic Cuban cigar. The 6.7" x 43 Lonsdale size makes it a versatile option for almost any occasion.

A sumptuous addition to the Partagas line-up, the Partagas Corona Gorda Anejados is box-aged for an additional 5 to 8 years. The result is a superbly smooth and complex flavor bomb.

The legendary Partagas Lusitania is one of Cuba's most illustrious smokes and a celebration unto itself. The 7.6" x 49 Double Corona-size cigar is not for those in a hurry nor for beginners, but will reward patience with a seemingly endless flow of pleasing flavor and complexity.

The most popular of all Partagas cigars, the Partagas Serie D No. 4 is a 4.9" x 50 treat much loved by cigar aficionados for its balance of richness, complexity, and taste. No exploration of Cuban cigars would be complete without this highly sought-after smoke.

Introduced in 2014, the Partagas Serie D No. 6 is a recent addition to the timeless Partagas "alphabet" series. The smaller 3.5" x 50 Petit Robusto size makes it a great alternative to larger Serie D cigars when time is limited.

The Partagas Serie E No. 2 arrived on the scene in 2011 to accommodate modern enthusiasts' desire for bolder large ring gauge cigars. The 5.5" x 54 smoke delivers an impressively rich and flavorful experience that will delight the most demanding palates.

The Partagas Serie P No. 2 is a 6.1" x 52 Piramides-shape unveiled in 2005 that has become another in a long line of Partagas classics. The cigar's size and shape, combined with its full-bodied character, makes it a preferred choice amongst connoisseurs.

The 2017 limited edition Partagas Serie No. 1 is a boldly flavored and complex smoke that modern cigar smokers have come to love. A great choice for extended aging, this 5.5" x 52 treasure offers up a sweet, creamy, and spicy smoke with firm notes of earth and oak at its heart.

If you are short on time or want a lot of cigar for limited money, then the Partagas Shorts are an ideal option. These 4.3" x 42 cigars deliver engaging smokes loaded with notes of wood, cream, chocolate, pepper, and spice. One of the best value smokes Cuba has to offer.

The Partagas story begins with Don Jaime Partagas y Ravelo, a Catalan by birth who immigrated to Cuba in 1838. Setting out to make world-class cigars, Don Jaime opened the La Flor de Tabacas de Partagas cigar factory in 1845 in Havana, and the Partagas brand was born.

Partagas cigars were renowned for their rich yet smooth body and taste, a product of exceptional tobaccos. Don Jaime used tobacco from the legendary Vuelta Abajo region, cultivated on his own tobacco plantations, widely considered to be Cuba's finest.

Don Jaime's son Jose Partagas was thrust into company leadership after his father's tragic murder in 1868. Jose eventually sold off the company's interest to Jose Bances, a banker by trade. Bances ushered in a new and exciting chapter for Partagas cigars in 1899 when he in an up-and-coming tobacco specialist from Spain, Ramon Cifuentes Llano.

Cifuentes assumed full control of the company in 1900 and embarked on a series of business partnerships that continued to build the Partagas prestige as a globally recognized brand. Management of the company and carrying on the Partagas legacy fell to Ramon Cifuentes Llano's three sons during the 1940s.

Through the three sons' leadership, Partagas cigars reached unparalleled heights, challenged only by H. Upmann as Cuba's top exporter of cigars. Then came the Cuban Revolution and Fidel Castro's nationalization of Cuba's cigar industry. Fortunately, Castro's regime determined that Partagas cigar production should continue, so we still have legendary Partagas cigars to enjoy to this day.

Partagas cigars' unceasing popularity is rooted in the tobacco used to create the cigars, the factory where the cigars are made, and finally, the smokes' unique character. Each of these factors come together to deliver rich and tasty cigars beloved the world over.

Officially known as Francisco Perez German, the iconic Partagas factory was built in 1845 and continues to be a top destination for those making the pilgrimage to Havana. However, production has ceased at the original site with Partagas cigars now made just a few minutes away at the Carlos Balino factory, once home to El Rey Del Mundo cigars. Here experienced cigar rollers known as torcedors mix traditional and modern techniques to work their magic much as they have done for generations.

Once a Partagas cigar is underway, you will notice a distinct earthy quality that complements the cigar's flavors, covering the full spectrum of the cigar flavor wheel. While earthiness is present in many cigars, how the character binds the tobaccos together and enhances the smoke from start to finish is unique to Partagas cigars and a major contributor to their popularity. 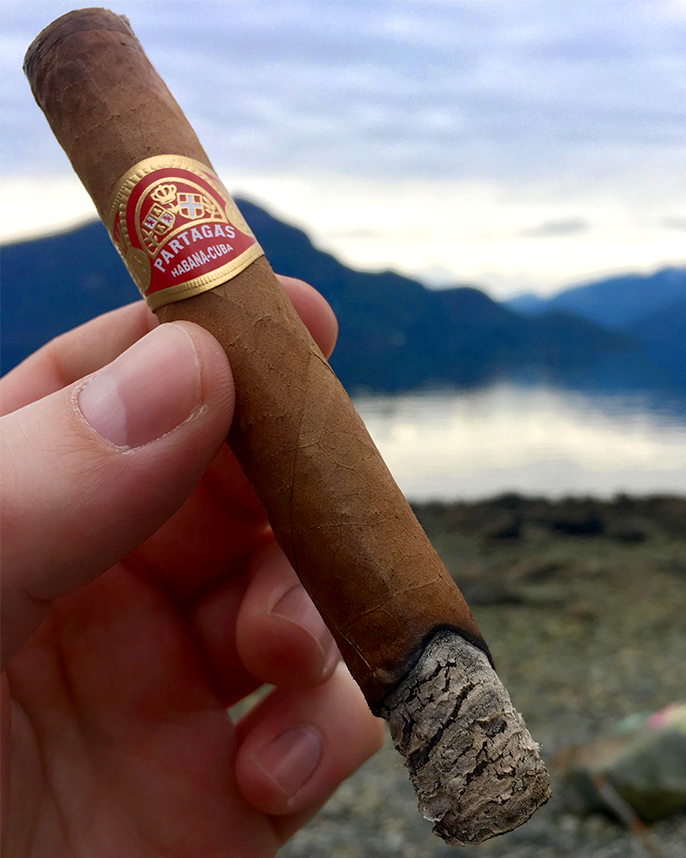 When to Smoke a Partagas Cigar?

A Partagas is a treat no matter the time or place. It will simply depend on personal preference when choosing a cigar for a particular occasion. Partagas cigars are at their best for life's grandest celebrations with favorite wines or spirits. A Partagas Serie D No. 4, for example, is a popular celebratory smoke and a fantastic Single Malt whisky pairing partner.

A favorite choice amongst veteran cigar connoisseurs, Partagas cigars are also some of the most approachable Cuban cigars on the market today. You don't need to be an expert to enjoy a Partagas. No matter your level of taste or experience, there is a Partagas cigar to enhance the moment.

Treat Yourself to Partagas

The only prerequisite for smoking a Partagas cigar is making the time to ponder the storied brand's legacy and savor every puff. So, don't wait to discover all of the treasures to be found within the Partagas brand. Shop the best online Cuban cigar source and get your authentic Partagas adventure started today.