Cigars and beer are a surprisingly natural pairing.. The savory and sweet notes of cigars blend well with the bitter, hoppy flavor of a wide range of light and dark beers.

You can create the perfect combination for your taste. However, you must take care to pair strong beers with strong cigars, and lighter beers with mild cigars. This is critical for keeping the flavors and aromas of either the cigar or the beer from overwhelming the other one. Follow our short guide to find the best cigar and beer pairings.

Can You Pair Cigars and Beer?

You can pair cigars and beer together just like you can pair whiskey or cognac and cigars. The key is to have beers and cigars with complementary flavor profiles. Different woody, spicy, and sweet tones can work well together, but also clash against each other.

Beer also offers the added benefits of carbonation. The effervescent bubbles act as a palate cleanser between puffs so you can enjoy the full flavor of your cigar. This is especially beneficial if you are new to cigars. A sip of beer will refresh your palate and prevent you from being overpowered by mid to strong cigars. 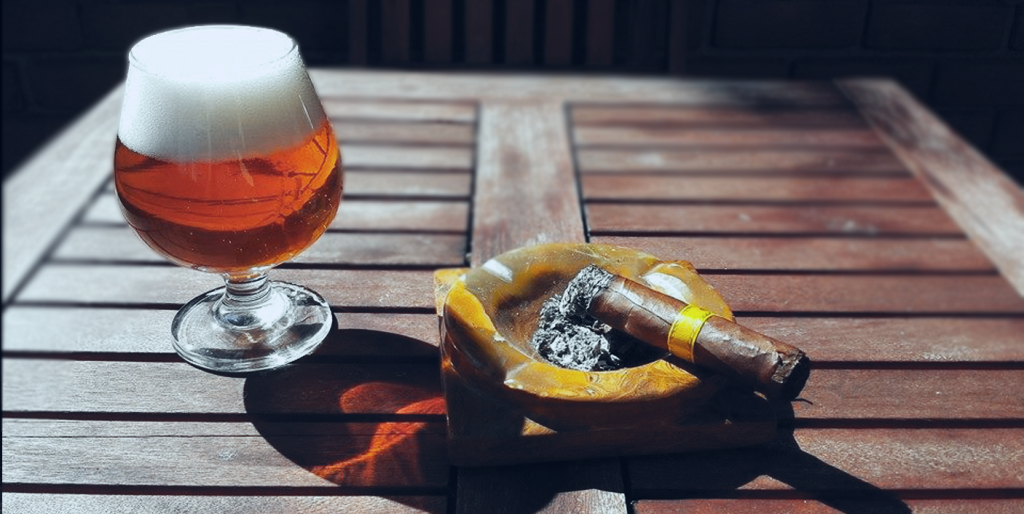 Unfortunately, pairing beers and cigars isn’t as simple as grabbing your favorite brew and smoke. It’s easy for stouts and porters to overwhelm mild cigars, and for full-bodied cigars to overwhelm light pilsners. Make sure to choose a beer that is at a similar body to your cigar, even if the flavors themselves aren’t very similar.

How to Pair Beer and Cigars

When pairing beer and cigars for the first time it’s important to keep it simple. After you appreciate how the two tastes can blur together, you can then experiment with flavors. Since there are many different beers and cigars in the world, there is no one-size-fits-all way to pair them. You will have to determine your favorite pairings for yourself and ask for tips from fellow connoisseurs with similar tastes.

A good rule to follow in the beginning is to match the depth of the body of the cigar and beer. The most popular Cuban cigars tend to be stronger and more full-flavored, and pair best with stouts and other dark beers. Medium-bodied cigars like the Montecristo No. 4 work better with IPAs and other ales.

Dark, oily maduro wrappers such as those found on the Cohiba Magicos Maduros 5 pair perfectly with a thick stout like Bell’s Kalamazoo. Both feature notes of chocolate, pepper, and coffee with the slight bitterness of the stout enhancing the mild salty flavor of the cigar.

The best way to start pairing cigars and beer is to try not to overthink the pairings. It can be tempting to only pair cigars with beers that taste very similar, with the same flavor notes and undertones.

However, trying to match too many flavor notes at once can actually cause you to miss out on interesting flavor combinations. Most cigars are far too nuanced and complex in their flavors to ever match perfectly with a specific beer.

Sometimes, the best taste experiences come from flavors that complement each other instead of completely matching. For example, vanilla notes in a beer can beautifully complement caramel tones in a cigar, and the aroma of black pepper can bring out the complexity of chocolate notes.

Think about simple food flavor pairings that you enjoy, but focus on the overall flavor intensity of the beer and cigar in order to be able to enjoy them both.

Getting your perfect pairing takes practice and experimentation. But just because there are tried-and-true flavor combinations doesn’t mean you can’t also create your own. Dry beers can still pair well with sweet cigars as long as their strength levels are similar and their flavors work well together.

Also, remember that spicy and fruity or sweet notes can accent each other. Black pepper notes common in some Cuban cigars, especially Cohiba Exquisitos, work well with hints of citrus in a light IPA such as Dogfish Head Flesh & Blood. Dry light beers with just a hint of fruity notes can be enjoyed with a surprising variety of cigar flavors without overwhelming or clashing with them.

To get the full experience of a beer and cigar pairing, smoke the cigar down to its last third. Since the flavor of a cigar changes as you smoke it, the pairing might not reach its full potential until the end.

Try this with full-bodied cigars like Bolivar Coronas Gigantes, which can be paired with a strong stout that’s not too sweet to give you a full range of flavor experiences while you smoke. Strong cigars are easiest to experiment with, since they’re hard to overwhelm. 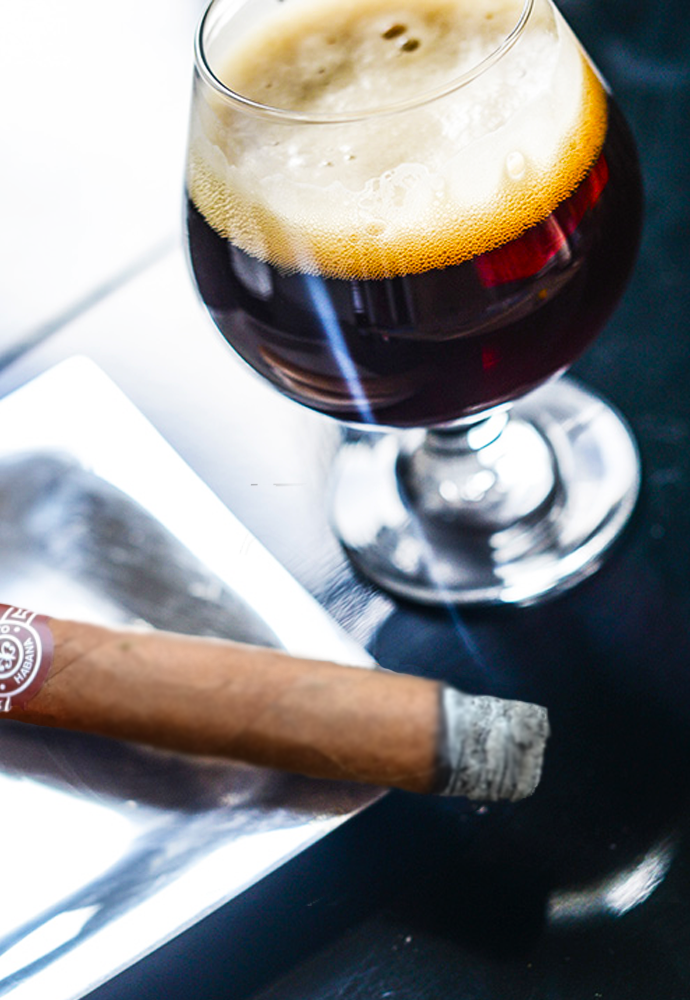 The best way to pair a beer with a cigar is to enjoy both slowly, taking a few sips of beer before taking a puff of your cigar. Cigars can extinguish on their own in 2-3 minutes, so try not to get too distracted by drinking your beer. Beer flavors can also change as the beer warms up, so it may be wise to start with a small glass of beer, then get a refill with fresh cold beer when you need it.

Since the carbonation in beer acts as a natural palate cleanser, it can also be enjoyed between cigars to allow you to taste the next smoke more completely. So a fresh beer makes the natural go between as you smoke two different cigars.

There are many good beers in the world, but good cigars are a little more challenging to find. Swiss Cuban Cigars has sourced the finest authentic Cuban cigars and ships them worldwide so you can enjoy them wherever you are. Start with a great cigar and you’ll have so many cigar and beer pairings.