Do Cigars Really Get Better with Age? 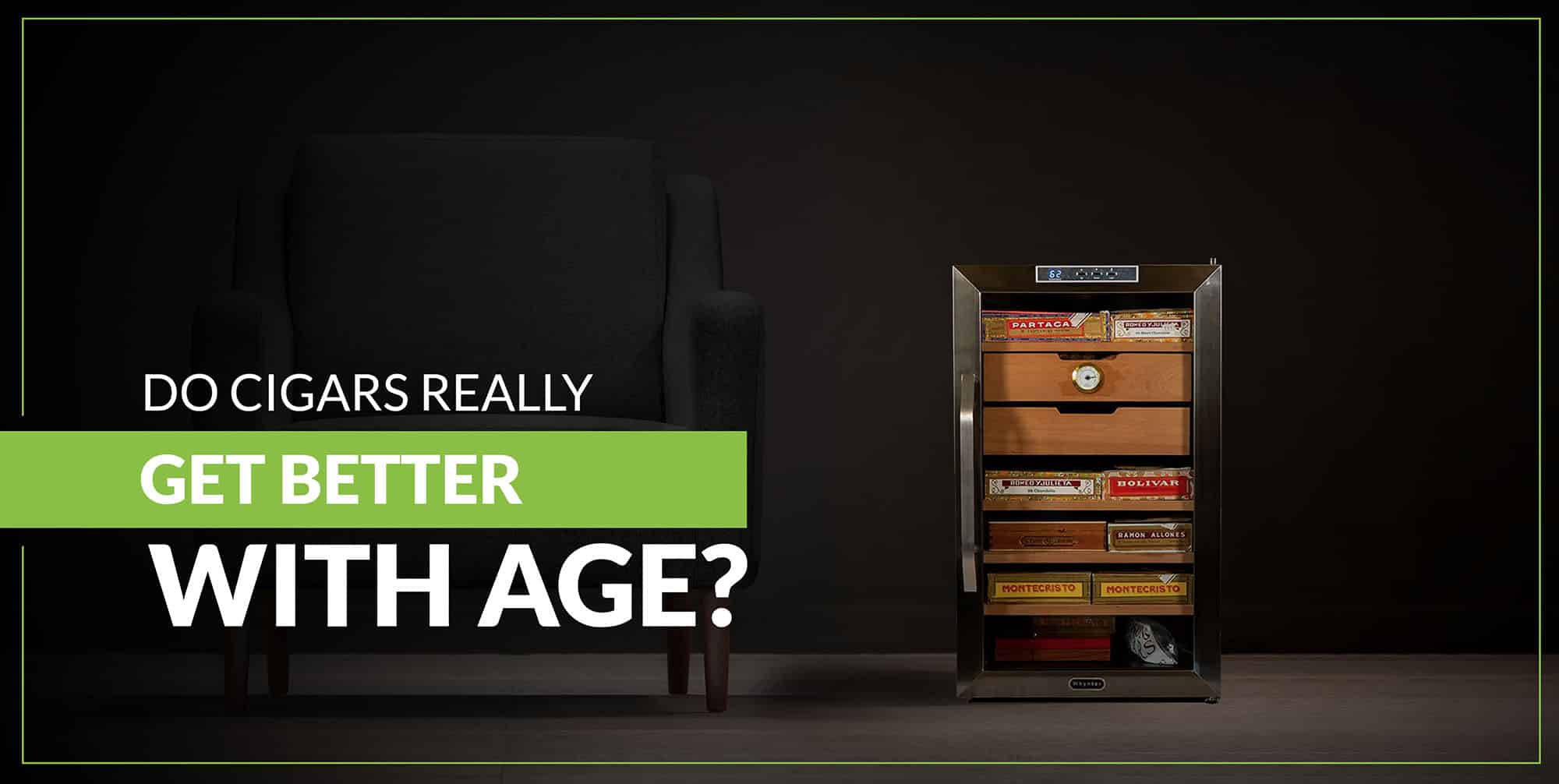 There’s nothing more tempting than tearing into a brand new box of cigars, breaking out some bourbon and lighting up the first cigar in the box. I’m here to tell you… STOP!

Before lighting up there are several factors about a cigar’s age that need to be explained, and I’m going to walk you through the seemingly complicated debate of aging cigars.

Is it True Cigars Get Better with Age?

For the uninitiated, the process of making cigars from seed-to-ash is lengthy and complex. All tobacco leaves, once harvested and sorted, undergo a fermentation period of about 2-3 years or more to remove the natural ammonia from the leaves. However, small amounts of ammonia often remain in the leaves, even during the rolling process.

Imagine a room brimming with the best cigars your favorite brand has to offer. If it sounds too good to be true, you’re dead wrong. In fact, all cigar factories own an aging room. After the young cigars are fully rolled, they enter the aging room for a minimum of 3 months. This time allows the flavors of the tobacco fillers, binders, and wrapper leaves to “marry”. The rooms themselves are immaculately run and cleaned, with high humidity and air purifiers running constantly to ensure the absence of any contaminants.

While 3 months is regarded as a bare-minimum, cigars are often aged for several years in a variety of methods. The theory is, the longer you age them, the better the product. Cigar makers are known to be creative when aging their cigars. Oftentimes you may see a “vintage” label on a cigar followed by a year. Many cigar makers have found that by saving a high-quality bumper-crop, they can save this special tobacco for an even more special cigar, sometimes as long as 10 years after rolling, and release a truly amazing cigar.

On the other hand, you may see cigar owners “barrel-age” a special crop of tobacco. Typically a former bourbon or wine barrel is used for this process, which imparts unique flavors to the tobacco. The wood of a bourbon barrel, for instance, is exclusively made of oak, and when charred on the inside will impart a bouquet of unique flavors through the aging process of bourbon. While these barrels only have a lifespan of only a few batches of bourbon, the flavors ingrained in the wood can still impart a unique bevy of flavors onto the cigars.

Aged cigars are, for the most part, loved by the critics and masses alike. However, generally speaking there are two arguments against aging. The first being that aging isn’t always worth the effort and patience. The second being that fresh-rolled cigars are more flavorful. While the latter can be easily explained, the first point is highly subjective.

To counter the first point, the noted critics will often concede that aging in some degree is beneficial. This argument is generally pointed toward rare cigars found at auction or overly aged cigars. Much like wine, cigars also have a sweet-spot when it comes to aging. When cigars reach this point, they may lose flavor or strength at a rate that is detrimental to the smoking experience. Tracking this is highly subjective to the smoker’s preferences and tastes as well as the storage and condition of these cigars.

Now to address the freshly rolled argument. While a fresh-rolled cigar can be something akin to a fresh doughnut straight from the baker, they are both extremely limited by proximity and also impossible to maintain. Unless you either work at a cigar factory or are hiding a cigar roller in your closet, getting freshly rolled cigars will be limited to special events only for most. Additionally, trying to keep the freshly-rolled flavor is impossible to keep. This can be attributed to the lack of “marrying” the tobaccos as mentioned earlier. Cigars will often enter a sick period in this time where micro-fermentations take place and flavors meld together.

How to Age Your Cigars

The easiest way to see for yourself if aging really works is by trying it yourself. Normally, cigars endure a transient “sick period” after being shipped or stored in large humidors. These cigars are often over-humidified to ensure freshness upon delivery by compensating for any potential shipping or transit issues. This over-humidity often hinders the burn of the cigar and ultimately harms the smoking experience.However, it can easily be rectified by allowing new cigars to rest in your humidor for a day or two. Once you complete this aspect we’ll move on to the prerequisites for aging.

In order to successfully age your cigars at home you must:

Now that we’ve cleared up the pre-reqs, let’s get down to the steps.

Step 1: Purchase a box or pack of cigars. The amount you buy will affect the length of aging you can test.

Step 2: Find a tasting card, or make your own.

Step 3: After waiting for the sick period to end, smoke one of your new cigars. Take note of the strength, flavors,  and anything notable to you. Rate it if you feel necessary.

Step 4: Wait. It’s time to stash the rest of your cigars and maintain your humidor in the meantime.

Step 5: After waiting for at least 1 month, you may smoke and review another. Take your time  smoking, enjoy the smoking experience, and fill out the form again. Afterwards, compare the forms and see how your experience differed,

Step 6: Repeat the process of aging and comparing. After a year of aging, you will very likely find that the cigars are more smooth, creamy and flavorful.

Step 7: Take note when any flavors drop off. You may have found the limit to aging this particular cigar.

Where Can I Buy Cigars to Age?

Now that you’re familiar with the facts and know the step-by-step process, it’s time to try aging on your own. Find the finest Cuban cigars on the market and try the art of aging today!