Cuban Cars – Everything You Need to Know

Cuban Cars – Everything You Need To Know

Vintage cars are one of Cuba’s legendary allures. These classic Cuban cars are almost exclusively from before the 1960s, yet they’re not rusty ruins. On any Cuban streets you’ll find a wonderful assortment of carefully preserved classic bars – they’re not Cuban car models, but they feel as Cuban as rum and cigars.

Part of Cuba’s allure for visitors is that the island is almost exclusively populated by cars built before 1960. Ford Falcons, Fairlanes, and Chevy Bel-Airs are the most common vehicles you’ll see cruising down the streets of Havana and Santa Clara. Why? It all has to do with politics.

In December of 2017, President Barack Obama lifted several sanctions from the small island nation of Cuba, opening up tourist travel and trade to the once-Communist nation. Now, the U.S. can buy Cuban cigars, sample Cuban rum, and visit the island to check out its fleet of classic Cuban cars.

In this article we explore the history of Cuban cars and why the island is so unique for its automobiles.

Why are Cuban cars so old?

A political trade embargo shut down most import-export relations between the U.S. and Cuba in 1960, except for medicine and some foods. President Eisenhower’s embargo was made more permanent in 1962 by JFK, and all trade, including vehicles and car parts, stopped.

All of the American-made cars on the island were made before the year 1960, and there was no end in sight to the embargo. Cubans had to do whatever they could to make sure these vehicles would last.

Often called “Yank Tanks,” these vintage American cars are well-maintained and still running. Although the average car in the U.S. lasts about 8 years, the cars in Cuba have lasted for 60 years due to the skill and effort of Cuban car owners who take enormous pride in their vehicles.

In 2014, Cuba opened its own state-run dealerships but unfortunately, no one can afford to buy a new car there. Only 50 cars and one motorcycle sold in the first year of business! A new Peugeot might sell for $250,000 USD, but the average Cuban’s monthly income is only $20 USD, so even a Peugeot is well out of reach. Since new cars are out of range for most Cuban residents, they rely on their fleet of old classics to get around.

What is the most common car in Cuba?

The latter half of the 20th century represented a stagnant diplomatic and economic period for Cuba, where nothing much moved on and off the island due to the embargo. No new cars arrived, but as the population increased, it was increasingly important to keep the old Cuban cars running.

Travel around Cuba in the 1970s and the streets were filled with Chevy Bel-Airs and Impalas, Soviet limos, Ford Fairlanes, and Plymouths. All these Cuban cars were imported and in production prior to 1960. The most common car you’ll see on the island is a Russian-made Lada. These tough, boxy cars represent Cuba’s affection for and alliance with the Soviets during the Cold War.

Even today the same cars dominate and Ladas are the old standby. However, a Chinese car – the Geely CK – is making inroads into Cuba, a sign of the island’s strengthening ties with Beijing. It doesn’t have any of the charm!

Different vintage cars you will see in Cuba 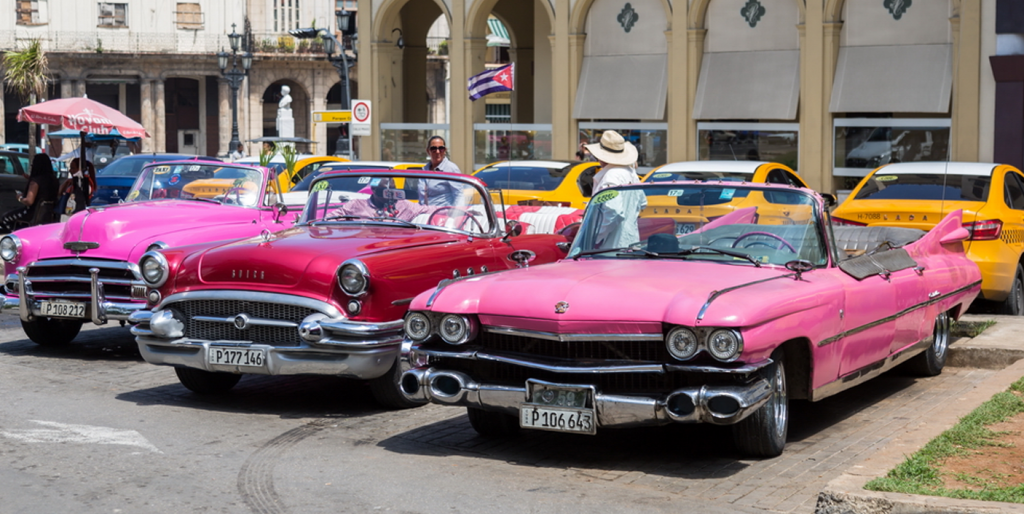 You’ll see a wide variety of old classics on the island roads, both American and Soviet. You may even be surprised at the ingenuity of the Cuban people, who have made do with a limited amount of resources to service an aging fleet. If you pop the hood of a Bel-Air, you may find a Russian motor powering the vehicle.

And why not? Cuban mechanics quickly learnt how to recycle and reuse car parts. They learnt how to fix anything and not a single scrap of metal went to the tip. These classic cars are part of the appeal when visiting Cuba and locals will proudly show you under the hood.

The broad range of makes and models attests to the ebb and flow of Cuba’s diplomatic relations. Here are some classic Cuban cars you will see across the island.

The Cubans have so much affection for these cars that some mechanics even call their Ladas family members. They are also the most common police vehicles and taxis.

Bel-Airs and Impalas are the two most common cars from Chevrolet that you see on the island. Before the embargo, between the years of 1950 to 1958, the number of American cars on Cuban roads doubled, and most of those cars are still part of the original fleet.

Bel-Airs made up a large portion of this initial surge of cars. The ‘57 Bel-Airs, also known as bavarros, with their tri-color bodies and immense tail fins, have come to represent the isolation and distillation of Cuban culture during the latter half of the last century. This is especially true when you lift the hood to find an engine made from a patchwork of parts from the Communist bloc.

This particular make and model car was beloved by one of Cuba’s most beloved allies, Che Gueverra. Guevara’s relationship with Cuba’s leader Fidel Castro is well-documented, especially after they came together to send a group of armed rebels to overthrow the Báptista regime in the 26th of July movement in 1953.

Gueverra also really loved his mint green Chevy Impala. This car, along with Cuban cigars and rum, is another emblem of Cuban culture.

The Fairlane rose to popularity prior to Fidel Castro. Between 1955 and 1959, Ford produced many versions of this vehicle, which started as a boxy family sedan but morphed into cars that soon showed up in Cuban scenes in James Bond movies – Die Another Day and Thunderball.

The most common Fords on the Cuban roads are Fairlanes with a retractable or folding top and powerful engine. They are loved by Cubans for their spacious interior which could fit the whole family, and a strong engine that can navigate the terrain of the island.

How are Cuban cars still running?

These classic cars may have once been American- or Soviet-made, but by 2020 they are classically Cuban cars. These beauties are passed down from generation to generation as family heirlooms.

It’s not easy or simple to keep a fleet of 70-year old cars running, but somehow, the Cubans manage it. Since resources like replacement parts and tools are scarce and have been for decades, Cuban mechanics and car aficionados got creative in order to keep their cars running.

Some of the intriguing methods of caring for these vehicles include using iron pipes for pistons, shampoo for brake fluid, and toothpaste to buff the vehicle’s paint job. Keeping their large fleet of antiquated vehicles running is no easy feat for islanders, as the salt air and spray make rust a constant threat to the beloved Ladas and Bel-Airs.

Usually, mechanics upcycle their older cars, breaking them down for spare parts. They even use scrap metal to make their own hood ornaments Even though the interior may be painted two or three times and a diesel Lada engine powers the Fairlane, it’s still a wonder that most of these cars are still running – the car mechanics of Cuba are truly automotive wizards!

There is nothing more quintessentially Cuban than gliding through Havana in a classic car with the top down, smoking a Cohiba cigar. Cigars and classic cars are as Cuban as rum. This little island practically invented a culture around these pleasures.

The last half of the 20th century may have been a period in which Cuban culture was left behind, but the isolation created a purely authentic Cuban lifestyle. Cuban rum, music, cars, and especially Cuban cigars offer qualities unique to the island.

Imports of new cars were restricted. At the same time, Cuban cigars could not be exported. Fortunately, that has changed. If you’re unable to travel to Cuba, you can still get a taste of Cuban culture by smoking an authentic Cuban cigar.

Nothing beats the ultimate Cuban experience of touring the island in a classic Chevy with the top down and a cigar in hand. You can still get the same Cuban feeling with an authentic Cuban cigar, which is as unique an export as a Lada-Fairlane hybrid on the streets.